Bob has been a dedicated volunteer at the Meals on Wheels Pantry for the past 5 years! Bob volunteers on Tuesdays, helping stock goods, unload the trucks, and is there for whatever else is needed. On Thursdays, he also picks up the bread donations from Family Fare to bring to the pantry. Count on him to be volunteering every Tuesday from 8:30am until whenever the job gets done, sometimes it’s all day. Upon your first interaction with Bob, it is very clear that his positive outlook and optimism are unshakable, that he is simply just happy to help.
Bob grew up in Belding, Michigan, the oldest of 4 siblings. He has held a variety of jobs and has extensive experience in many different fields. He was a truck driver all over the country for about 15 years, he’s also worked in factories, he drove trucks for Goodwill and he also worked for Grand Rapids Public Schools as a playground supervisor, a cook, and any other odd jobs that they needed to get done. He speaks fondly of each one of his jobs and says he’s enjoyed every single one of them, his positivity remaining a consistent part of his character. When he met his wife, Kathy, he moved to Grand Rapids with her and they married and have one son and an 8-year-old granddaughter. Bob does daycare each day to watch his granddaughter and in the summer they spend most of their time at the pool in his backyard!
Bob got involved at the pantry when his wife Kathy, who is a pantry employee, noticed there was a need for some help on Tuesdays and suggested to Bob that he should get involved. And he’s been a volunteer ever since. Bob speaks so highly of the people he works with, citing them as his favorite part of volunteering. “I enjoy the work that I am doing, and I know that I’m helping the seniors and it’s good for them, but the people I work with are the best part, they are the reason I come back each week,” he says. And the feeling is mutual, Danielle Simmons, Pantry Manager, says “Bob is awesome and will help with whatever we need, whenever we need him.” Bob and Kathy also put on the annual garage sale at the pantry that has shown to be quite the success, with this year the sale occurring in September.
We are so thankful for Bob’s commitment to our program and so grateful to have him as a part of our team. We appreciate him, and others like him who give so generously of their time to the seniors in our community. Thank you, Bob! 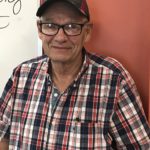